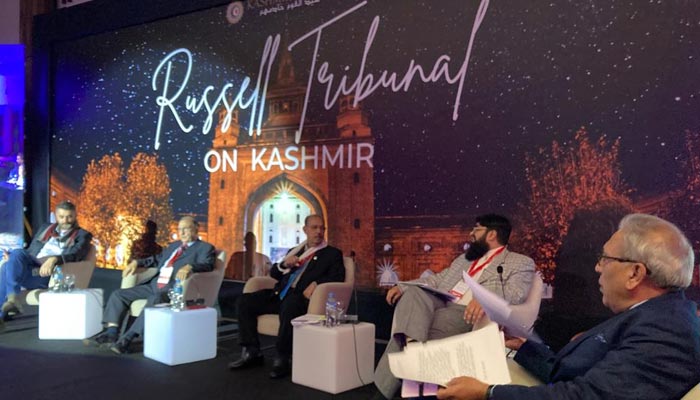 Chairman Kashmir Council Europe (KC-EU) Ali Raza Syed has applauded recommendations of the Russell Tribunal on Kashmir in Sarajevo and called UN to implement the recommendations.
Russell Tribunal on Kashmir which was jointly initiated by Russell Foundation London and Kashmir Civitas and other civil society organizations in the Bosnian capital from Friday to Sunday, was attended by various experts of region and global affairs, scholars and opinion makers from different parts of the world last weekend.
The final statements of the judges of the tribunal emphasized that situation in Jammu and Kashmir (occupied Kashmir) is a serious matter of concern for the whole humanity as genocide and rape, unlawful detention and forced mass blinding and other crimes of against the humanity are being used as weapons of war.
Chairman Kashmir Council Europe (KC-EU) Ali Raza who attended Russell Tribunal on Kashmir in Bosnia and delivered a lecture on crimes against the humanity in occupied Kashmir in a statement reacting over the judgments of the tribunal said, the tribunal accurately accepted the facts about occupied Jammu and Kashmir witnessing worse crimes against the humanity.
The judges of the Russell Tribunal supported the long struggle of people of Kashmir for right to self determination and UN resolutions in the context of the issue. The Tribunal also confirmed that Kashmir is among the most heavily militarized areas on the planet, with upwards of 700,000 to 900,000 Indian occupation forces. The tribunal also praised the reports issued by United Nations Human Rights Commissioner and other human rights organizations on the severe situation of human rights in occupied Kashmir.
Chairman Kashmir Council EU Ali Raza Syed called upon the international community perceptually UN and major powers of the world to implement recommendations of the Russell on Kashmir.
The Tribunal called upon the United Nations to properly oversee the decolonialization process in Kashmir. Just as the United Nations intervened and found that Britain had not properly completed the decolonialization process in Chagos Archipelago in the 1960s, it could offer a similar intervention vis-à-vis Kashmir.
The Tribunal also asked the United Nations General Assembly to request an advisory opinion of the International Court of Justice to characterize the Kashmir situation as an uncompleted decolonialization process and to recognize the legal force of the Security Council’s resolution calling for a plebiscite of the people of Kashmir in order that they may determine their future.

The Tribunal recommendations said, this is only the beginning of a long process. Given the seriousness and gravity of these incriminations, it is important that international institutions and human rights tribunals urgently open cases and examine these allegations and prosecute those responsible for violations. The reports we have heard suggest that the government of India, the Indian Army and the Indian Intelligence Service are responsible. This requires further investigation.
We invite the world public to visit Kashmir and report on the state of freedoms and human rights. We are continuing to closely monitor the situation in hopes of holding criminals to account, the tribunal suggested.