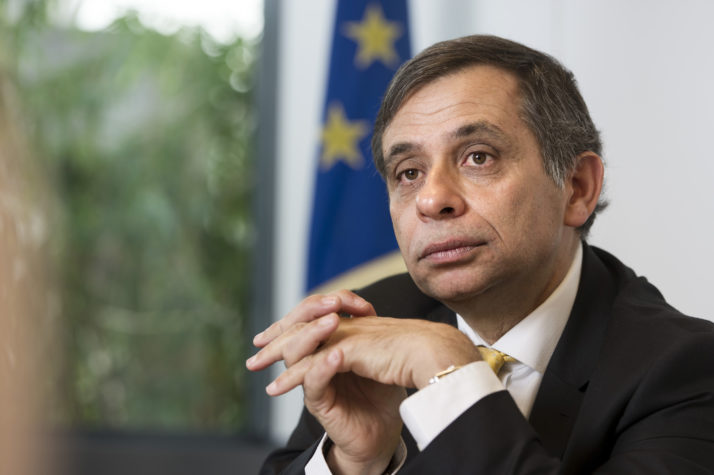 Q: Mr. President, Jean Monnet, who we call the “Father of Europe”, was the first President of the European Union modernisation and reconstruction plan in France after the Second World War, aimed at the economic economic recovery. This plan, known as the ‘Monnet Plan’, set France on the road to economic miracles in the 1950s. It was this plan that gave impetus to the proposal by French Foreign Minister Robert Schuman that led to the creation of the European Coal and Steel Community, which laid the foundations for the creation of the European Economic Community, the predecessor of the European Union, in 1958. Today, there are many who believe that the European Union should return to the ideas of the founding fathers, such as Jean Monnet’s original plans. Now that the ‘Future of Europe’ conference is under way, which is intended to chart the way ahead for the EU, what are some of the ideas from Jean Monnet that could be useful for the future of Europe?

A: I think that in this respect we should focus on two messages from Jean Monnet: The necessity of harmony among the european nations and of concrete actions Firstly, I would like to say, because it is not well known, that the text of the so-called “Schuman Plan”, which defined the future of a common Europe, was written in its entirety by Jean Monnet, who simply handed it over to Schuman, who was then Foreign Minister, to present it to the French National Assembly. If we take up this document, we can see how valid the ideas and concepts are today. Monnet wanted to build a common Europe based on harmony between the Member States. Today, this is a very important message, because we see that the current EU politicians are promoting division through their policy of dividing the member states into ‘good’ and ‘bad’. Far from Monet’s idea of one centre imposing its will on all. It was also far from Monet’s idea that a common Europe should be built on a political line, especially the idea of attacking or punishing a member state that did not follow this central political line.

Today, there is a constant reference to European values, which everyone interprets in their own way. Monnet’s idea was not to build a central political power, but to take concrete steps, unanimous among the Member States, with content that is needed and accepted by the whole community for the benefit and profit of All.. This requires total harmony and excludes the possibility of judging National communities for their identities and own values, herirage of their unique History.

If we look at the concrete steps, take the Customs Union, the Monetary Union, the Common Agricultural Policy, then everybody can understand the benefits of these and they can decide for themselves when they want to join the union. There is the for example the question of a common border management. We can see how quickly the perception in the European Union has changed in this respect. In this case too, we see that an increasing part of european population which disagree with the vews of some of the leaders.

Q: Does this mean that Jean Monnet did not agree with the creation of a federalist United States of Europe?

A: His vision was of a united Europe based on respect for the sovereignty of its member states, on respect for their identities and differences. He had one more idea, which he stressed throughout his life: all Member States, regardless of their size or political weight, should have equal value in the European community. He called this the principle of equality between Member States. He believed that Germany or France should have no more influence on EU decisions juts because it’s big but than, small countries like, say, Luxembourg. This means that small countries must be given the same opportunities,to inflluence the policies, to propose initiatives and to vote legislation than the bigger ones . This is a typical manifestation of confederation. Europe should move towards this direction and not towards forced federalism.

Q: How can the Jean Monnet Association put forward these ideas in the context of the ongoing “Conference on the Future of Europe”? How can it make these ideas a topic for discussion in any forum within the Union?

A: Nevertheless, we are trying to raise Jean Monnet’s basic ideas in every forum. At the same time, we can offer you Jean Monnet’s former house near Paris, now property of the European Parliament,  where politicians, think tanks, experts and journalists can discuss these ideas in a relaxed atmosphere. I dont think that Europe needs more general discussions about its future like they do in that Conference. We think that we should come back to concrete actions.

One of these could be a better the protection of citizens, We see that our planet and therefore the countries of Europe are increasingly exposed to natural disasters. We only have to think of the forest fires that rage in the south during the summer. In Greece, we have seen huge damage caused by forest fires for several years in a row, but we have also seen the same in Portugal and Italy. We know that these countries are far from having sufficient protective equipment, such as the aircraft needed to extinguish fires, the helicopters needed for rescue. We know that in such cases, Member States, including Hungary, offer voluntary assistance, which is very commendable. However, such cases require coordinated action, which would require the creation of a European rescue team capable of acting immediately in such cases. We are therefore negotiating with civil protection experts within the Jean Monnet Association to set up an effective European fire-fighting team, a task force. Large companies and our social partners could contribute to the maintenance of such a task force.

Q: The Jean Monnet Association regularly organises conferences on a wide range of topics. I understand that in the near future they would like to discuss EU enlargement in more depth. Do you see any progress in the EU’s intention to admit any new member states in the near future?

A: As we know, the current situation in the Balkans is still very unstable. There are many problems, mainly ethnic, minority problems, but the growing influence of some countries, including Turkey, is adding to the tension by strengthening Islam in the region. The longer we wait, the stronger the feeling in these countries that we will never be part of the Union and then they will look for other solutions. We are helping these countries as much as we can, for example in northern Macedonia we have launched several programmes to help the country to prepare for EU membership more quickly.

Henri Malosse (born 6 October 1954, Montpellier, France), President of the Jean Monnet Association, is a French politician and businessman.He was President of the European Economic and Social Committee (EESC) from April 2013 to October 2015. First EU representative to attend the Euromaidan in Kiev in December 2013 and to visit the 14th Dalai Lama in Dharamsala on 10 March 2014. He is also temporarily blacklisted by the Russian Federation. On 15 October 2014, Henri Malosse is awarded the National Order of Honour in Brussels by the former President of the French Republic, Valery Giscard d’Estaing.