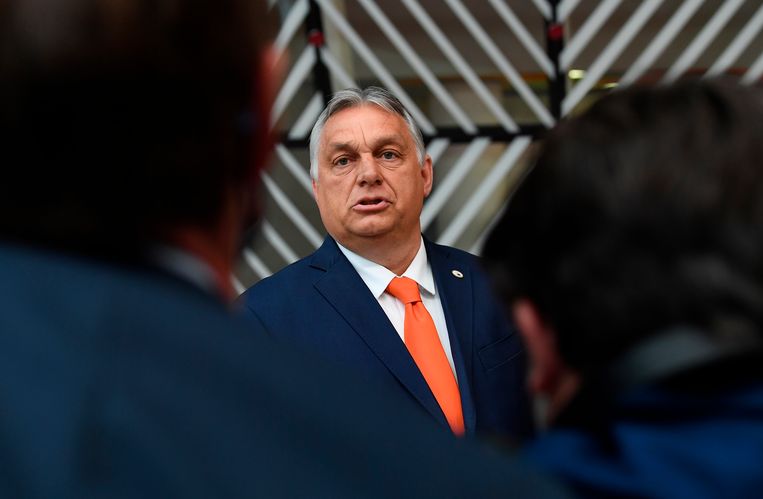 Leaders from around the EU confronted Hungarian Prime Minister Viktor Orbán over anti-LGBTQ+ measures on Thursday in an extraordinary clash reflecting rising tension over the bloc’s core values.

In a heated debate around the European Council table in Brussels, leaders spoke in unusually personal and emotional terms. Dutch Prime Minister Mark Rutte suggested Orbán should leave the EU while Luxembourg’s Xavier Bettel spoke of his own struggles to be accepted as a gay man.

“I did not become gay. I am, it is not a choice,” Bettel told the conservative Hungarian leader, according to officials who monitored the discussion. “My mother hates that I am gay, I live with that. And now you put this in a law. I respect you, but this is a red line. It is about basic rights, the right to be different.”

For over a decade, Orbán — who presents himself as the champion of an illiberal Europe — has clashed with Brussels and other EU leaders on a range of issues from the rule of law to migration. His government has been accused of undermining judicial independence and taking control of swaths of the media, as well as fanning the flames of anti-Semitism, Islamophobia, homophobia and anti-Roma sentiment.

Orbán has brushed off the allegations and suffered few consequences for his actions from the EU. Some fellow Central and Eastern European countries have not joined the criticism of Hungary, and that division could be seen again in Thursday night’s debate and in reaction to the LGBTQ+ measures in recent days.

But the battle over LGBTQ+ rights appears to have touched a nerve with many other EU leaders and suggests their patience with Orbán is wearing thin. The issue has also cut through to broader European public opinion as it spilled over into the Euro 2020 football tournament.

The controversy erupted after the Hungarian parliament passed legal amendments to ban the promotion and portrayal of homosexuality or sex change to minors.

At the summit on Thursday evening, multiple EU leaders voiced outrage at the mention of homosexuality in a bill originally intended to fight pedophilia — and told Orbán the legislation has no place in the EU.

Orbán pushed back against the criticism, insisting the measures had been misunderstood, and were merely designed to protect children and ensure the rights of parents to raise their families as they saw fit. He also said he felt under attack from all sides, according to diplomats familiar with the discussion.

Orbán received support from Poland, which has also clashed with Brussels over rule of law, and to some extent also from Slovenia, while a few countries — such as Slovakia — did not take a clear position.

But a majority of heads of state and government delivered scathing critiques of the Hungarian approach, emphasizing the need to support young people rather than stigmatize them.

Rutte, the liberal Dutch leader who is a longtime critic of the Hungarian prime minister, openly raised Article 50, the EU Treaty provision used to trigger a departure from the bloc.

German Chancellor Angela Merkel said that while parents have rights, children have rights of their own — and that it is problematic to equate homosexuality with pedophilia.

But it was Bettel who took the most personal approach, with a direct appeal to Orbán.

“We have known each other for eight years, but this touches me,” he said. “You see how many young LGBTI commit suicide. This is very bad. This is stigmatizing. Now we have anti-gay posters in France. You make people a minority. This is really terrible in a European country.”

Orbán has repeatedly insisted that the amendments are about protecting children’s rights.

“I’m a freedom fighter [against] the Communist regime. Homosexuality was punished, and I fought for the freedom and the rights — so I am defending the rights of the homosexual guys,” he told reporters earlier in the day.

Hungarian Justice Minister Judit Varga took a combative approach, writing on social media that Rutte has “written himself out of the circle of civilized people.”

“Hungary doesn’t want to leave the EU. On the contrary, we want to save it from hypocrites,” Varga tweeted.

Thursday’s debate came at the culmination of a week of growing outrage over Hungary’s moves.

Over half of the EU’s member nations signed a declaration condemning Hungary’s legislation. European Commission President Ursula von der Leyen called it a “shame,” and the EU executive has indicated it will take legal action. And 17 EU countries published a joint letter vowing to “continue fighting against discrimination towards the LGBTI community.”