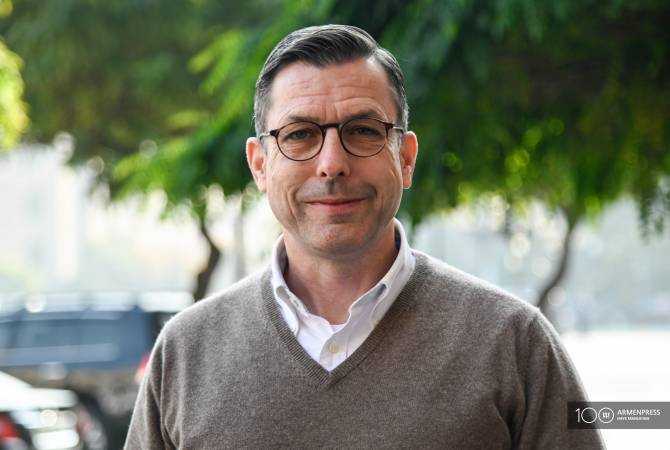 Q: From its birth until the outbreak of the war in Ukraine, the European Union has defined itself as the creator, sustainer and guarantor of peace in Europe. The war in Ukraine, however, has destroyed this narrative. The conflict raised sensitive questions such as EU security policy and the EU’s role in the world. How do you see the conflict in Ukraine as having brought the EU closer together or, on the contrary, as having brought out the differences between member states?

Answer. There is no clear answer to this question, as there are areas where unity and solidarity have been shown, while in others this unity has completely disintegrated. After the outbreak of the war, the EU Member States came together relatively quickly and united against the Russian invasion. They went beyond their internal disputes and made weapons available to Ukraine. Increasingly severe sanctions against Russia were agreed upon in stages. Ukrainian refugees have been accepted and most member states have pledged to increase defence spending to the NATO target of 2 per cent of GDP.

At the same time, they have clearly and firmly refused to commit themselves to rescuing a sovereign, democratic European country with military occupation. They refused to supply certain types of weapons, such as fighter aircraft. From security or geopolitical point of view, the Union has gone as far as it could go in terms of united action, and from then on, the offer of arms and the level of support was up to the Member States. Initially, the EU wanted to coordinate this action, but the member states did not ask for it.

EU unity has also been shown on the issue of phasing out Russian energy imports, but implementation has been slow and partial due to diverging interests among the Member States. Many European companies have withdrawn from Russia, more by their own choice than because of official sanctions, but many remain because they do not feel threatened.

There is an even greater divergence between member states in terms of where they seek to source their gas and oil. The divergence is determined by geography and the potential for changes in political commitment, and in this respect, it is not Europe that has been strengthened, but above all the value of resource-producing countries in Africa and Asia that has increased. In terms of gas and oil supplies, the Member States are going their own way, which can in no way be seen as a consolidation of European unity, even if the EU itself is seeking to supply gas to the Member States from Azerbaijan. This is just a drop in the ocean.

Q: Doesn’t the fact that the EU member states have started to develop their military industries means a move towards the creation of a European army and ultimately towards the realisation of a Macronian sovereign Europe, allowing the European Union to finally play its weight in world politics?

A: The fact that EU member states are increasing their defence spending does not in itself mean that they are ready to develop a unified European military force because there is no intention for the European Union to become a military power with striking capability. The fact is that the Ukraine crisis has galvanised the coordination of European defence capabilities, but it has also reinforced the US military leadership on European security issues. The conflict in Ukraine has therefore deprived the EU of the possibility of developing strategic autonomy rather than facilitating it.

Q: The EU has been strengthening its defence capabilities for years through permanent structured cooperation and the European Defence Fund, but are these efforts all in vain if the US, through NATO, has deprived the EU of the autonomy to shape its defence policy and international political role?

Answer. The EU security policy measures adopted since the invasion of Ukraine are only modest signs of the EU’s desire to set a new direction for itself in terms of international security challenges. For some years now, there has been a growing and curious dissonance in the debates on EU foreign and security policy. Almost every official policy paper, ministerial speech, publication or journal article repeats that the EU needs to increase its foreign policy ambitions. There is a striking unity of opinion that the EU must commit itself to exerting greater power and influence in the world. Some argue that the EU should take advantage of the geopolitical opening created by the war in Ukraine to take forward long-standing options to strengthen its institutional capacities and processes. The EU and its member states’ official political ambitions are all geared towards the same goal of an increased international presence and voice. But, if we look closely, the debate is mostly about how far the EU falls short of this widely accepted goal.

Moreover, many elements of EU external action are moving in the opposite direction, towards reduced ambition and truncated engagement. Despite the rhetoric everywhere, much of the EU’s external action has for some time been less about the exercise of external power and more about the containment or moderation of the influence of other powers. The trend is driven by a lack of political will and several factors, including domestic political constraints, scarce financial resources and a focus on strategic prudence.

Q: Are there already signs that the European Union is losing international influence for the reasons you mentioned?

A: There are already tangible signs of this. The EU is now clearly being squeezed out of Africa and Latin America by China, and we see that the EU has no particularly ambitious strategies to reverse this in any region. In parts of the Middle East, Russia, despite its limited economic power, has also squeezed out European states. At the same time, the EU is constantly striving for ‘more Europe’ in its foreign policy, which means it wants more of everything – more power, more autonomy, more sovereignty, more unity, more leadership, more presence, more voice – but behind this desire there is no real global structure, no unified will. Not to mention that the push for more power and more European sovereignty often clashes with mutually beneficial partnerships with other societies. The EU must therefore be more selective about where and how it increases its international ambitions. If there is a lesson to be learned from the conflict in Ukraine, it is that there needs to be a much more informed debate than hitherto about Europe’s role in global affairs. Such a debate would examine if the EU can be a global superpower and analyse in more depth when and where it should or should not intervene in crises.